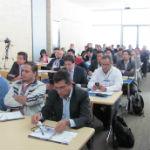 Colombia. Next week, from November 9 to 12, the eighth version of TecnoTelevisión&Radio will be held, an event of which this year the wide international presence stands out, both in the exhibitors of the commercial exhibition, and in those who will be in charge of the two conference rooms. Schedule your participation and get the most out of this week's activities.

This year the academic program, which will be held at the Wyndham hotel from November 9 to 11, will have two conference rooms by leading professionals from the United States, Canada, Spain, Brazil, Argentina and Colombia.

The second is the radio room, in which IP, music content, RF and a workshop on content and formats of radio programs will be discussed. For Radio's conference program, click here.

Within the framework of the fair, the third version of the TecnoTelevisión University Contest will be awarded, which seeks to recognize the best university audiovisual production of students of careers related to television and video in Colombia. To view the finalist entries and vote for your favorite, click here.

On Tuesday, November 10, within the framework of the first day of the commercial exhibition, the welcome cocktail to the fair will be held at 6:00 p.m.

In addition, follow the special broadcast that will be made by the magazine TVyVideo+Radio on November 11 and 12, with interviews with the protagonists of the industry present at the fair, through www.tvyvideo.com

No thoughts on “It's time for TecnoTelevisión&Radio 2015”