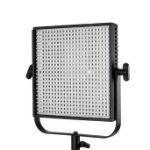 Colombia. Congo Films, together with Vidiexco, will present at TecnoTelevisión the new products of Lite Panels of the manufacturer Vitec Videocom, as well as O'Connor, Vinten, Sachtler, Anton Bauer, Teradek, Petrol and others.

"We are really happy with the alliance with one of the most important and knowledgeable companies in the cinematography and digital production industry such as Congo Films," said Jose Cadavieco, president of Vidiexco and master distributor for Latin America and the Caribbean of Vitec Videocom products.

He added that "It is these specialized partners and industry experts, such as Congo Films, who give added value to innovative solutions with new workflows according to industry standards and the reality of the region, in addition to providing advice, first-line technical support and product availability in each of its offices in Colombia, Peru, Panama and Chile".

Congo Films is a leader in leasing, and now sales, high-end production equipment, and has an impressive track record in the industry. They have equipment for demonstrations and are soon coordinating a tour of different cities that will include universities, television channels, rental houses and independent production companies.

For these visits is planned the presence of Pat Grosswendt, one of the founding members of the pioneer company in LED luminaires and veteran of the Hollywood film industry.