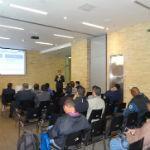 Colombia. With more than 30 exhibitors and speakers from six countries, the eighth version of the specialized fair TecnoTelevisión & Radio will take place, which will take place from November 10 to 12 in hall three of the Corferias convention center in Bogotá, Colombia.

This year the academic program will have two conference rooms by leading professionals from the United States, Canada, Spain, Brazil, Argentina and Colombia, and will address current issues and importance for the broadcast industry such as IP, streaming, 4K, drones, digital television, technological update, while in the radio room will talk about IP, music content, RF and a workshop on content and formats of radio programs.

For its part, the commercial exhibition, which is characterized by having the latest developments and systems for television, video and radio, will have the participation of Colombian companies, but also with an outstanding participation of international distributors and manufacturers that seek to gain presence in the Colombian market and the Andean region.

Within the framework of the fair, the third version of the TecnoTelevisión University Contest will be awarded, which seeks to recognize the best university audiovisual production of students of careers related to television and video in Colombia.

With these novelties, we are sure that TecnoTelevisión&Radio with will exceed the 3,548 visitors it had in its 2014 version, of which 15% closed important businesses during the fair and 48% declared to plan purchases in the six months following the fair.