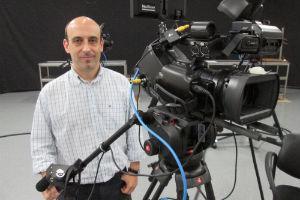 The academy plays a fundamental role in the process of adoption of digital television, both in the training of professionals, and in the research of models of technical and cultural use.

In this interview for TVyVideo, Professor González talks about the results of the process of democratization of audiovisual communication in his country, research and the role of the State and the University in what has been the implementation of digital TV in Argentina.

Within the context of Argentine television, how has the process of digital renewal been?

Daniel González: The process of digital renewal has not been in Argentina only a technological transition, it has been a great opportunity to carry out a process of democratization, the result of a problem of monopolistic concentration of the mass media and the capital Buenos Aires as the main producer center of television content in the country, which produces 90% of audiovisual content.

It is paradigmatic that in our country this process arrives through the sanction of the Law of Audiovisual Communication Services, then the implementation of the ISBBT standard. Paradoxical because the government made the decision to extend television licenses for another decade to those groups that had established themselves as monopolists. Ten years in advance, the decision is made to postpone for ten years the licenses to traditional media extending until 2023 or 2025.

Why did Argentina consider adopting the Japanese ISBBT standard?

Daniel González: The ISBBT standard was chosen considering three elements such as: the possibility of multiplication that gave the option of having a packet of signals to have more, at least four for each analog channel that was transmitting; the mobility involved in bringing television to mobile devices, telephony, among others  and;  interactivity and the implications of this as a significant process especially in the possibilities of participating in public policy or educational plans  , among others.

How is the implementation process going?

In 2009 the digitization process was launched and the analog blackout or digital ignition is established ten years later, that is, in 2019;  we are five and a half years from this determination, we have a firmly developed process but also many outstanding debts such as the consolidation of a level of coverage of 90% of the country in transmission and reception and there is a lack of mechanisms for the implementation of a greater number of channels

This process is underway and precisely this year (2015) licenses were called for 82 new digital television channels throughout the country,  among which are  as actors, licensees for profit and non-profit. The positive thing about this process is that a very active social policy has been established for the reception when the Set-Top-Box (STB) or receivers were given free of charge to all those social sectors with economic difficulties.

What topics are Argentine universities investigating about digital television a few years after the analog blackout in the country?

Daniel González: There are different types of research. Some designed from the field of social communication itself and another from computer engineering. The National University of La Plata in one of its computer laboratories developed applications for interactivity because there is an expectation that interactivity solves many aspects of educational processes.

It is sometimes complex that transition from analog to digital in which the traditional user has been in that system for many years, decades. How has this literacy process been with users in Argentina about the uses of Digital Terrestrial Television?

Daniel González: That question is very interesting because it actually has to do with other aspects related to the socio-cultural character of television in Argentina; on the one hand because from the perspective of public policy much has been done so that the transmission and reception of the digital television service throughout the country can be contained. Argentina is one of the countries with the highest penetration of cable television in the world, that is, one of the four or five countries with the highest penetration of the system.

In that sense, the same system managed by the same television channels and the same  concentrated media has generated many tensions so as not to make digital television install itself with prominence by the fact of moving from a rented system of cable television to pass a free system of digital television, to the point that this system has been judicialized for at least four years.

Daniel González: Without a doubt, the role of universities in the training of human resources is very significant both from the technical perspective and from the cultural, conceptual and theoretical perspective. It involves thinking about a new television system and universities have been very active in that with the creation of new careers and a set of academic tools that make it possible to discuss the subject, to reflect, to carry out workshops and productive processes.

Can you give us a concrete case of that work?

Similar cases are also occurring in other institutions such as the University of Córdoba and the University of La Matanza. From this perspective, a proposal of the National State itself was created from the Federal Authority of Audiovisual Communication Services, to develop a Diploma in Management of Audiovisual Communication, with such success that it had two thousand  enrolled in the university system, with which both the role of the state and the role of universities in the perspective of the training of human resources has been very active, thinking about this new panorama of audiovisual communication.

Recently, the Master's Degree in Digital Television of the Pontifical Bolivarian University was launched, as the first experience in Colombia; From your perspective and knowledge in Argentina, how important could the opening of a master's degree in in-depth research of this type in Colombia represent, not only for the region but for the country?

Daniel González: Without a doubt, the initiative to propose a Master's Degree to the audiovisual sector is very important. In the first place because it is fully linked to the communication process that Colombia is also going through and not only limiting itself to the process of technological transition but also because it is a great opportunity to rethink aspects of communication policy in the country, which is  very important and healthy with effects not only for Colombia but also for the Latin American panorama because it is a faithful example in which universities actively participate. and with a lot of prominence in the process of the implementation of digital television. The truth is that is why I am here today accompanying this initiative because I think it is very important and very significant.

Daniel González: We have several expectations in that, especially universities because we see in interactivity the possibility of carrying out educational processes. For us it is the main factor we see in interactivity; in addition, accompanied by a significant policy such as the Law on Digital Audiovisual Communication Services, which is a specific legislation for digitalization, which made the decision that the channel intended for mobile devices and interactivity is tendered independently of the licensee channels of private management.

What is the goal?

Daniel González: First of all, that the interactivity with the channels destined to mobile telephony are not only entertainment or for the sale of services, but that they are strongly defined and starred by educational processes as soon as it can be proven that they are at the service of an educational proposal.

That idea is above an entertainment proposal with which we have many expectations; we also know that it is a new panorama with which we also have to continue investigating, investigating, testing, but I am sure that interactivity will be the tool that gives life to a television that is losing many viewers, as a result of other  technological processes such as the Internet or the possibility that society now and, above all, the new generations, attend television through another device such as the computer or the use of social networks. That citizen interpellation that television rarely does without a doubt that interactivity will address a very important tool.

For you in the south of the continent, how has the experience been with other countries, specifically Brazil. What has been the Brazilian experience with the digital television process, also in Uruguay countries that are nearby?

Daniel González: I believe that Brazil has been the first to take the bet with the ISBBT standard in the development of the Shinga application that is the one that allows interactivity. Both Brazil and the vast majority of Latin American countries have encountered difficulties with respect to economic groups that, in a certain way, threaten the transformation process with which the definitive processes of digitalization have been greatly postponed.

Brazil is a case with the company O Globo. Uruguay is a country that is much slower in the face of this process and although Argentina has placed many expectations and many advances in these five years of operation of digital television, there are also many expectations in the face of the new political process that this year it has to attend, in which the main media that have discredited the government of the day, they not only continue to do so but also to prosecute the process of implementing the regulations; in addition, it explicitly supports opposition sectors that give guarantees of the monopolistic concentration of the media. So there are expectations with what will happen politically this year in Argentina, hoping that the digitalization process does  not stop on its important, active and  dynamic path in the face of the analog blackout of 2019."

No thoughts on “Panorama of digital TV in Argentina”