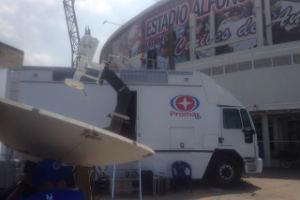 Promar must plan its broadcast of baseball games for eight directors, each with their own style and with their own way of placing the cameras, recorders, monitors and so on.

Thanks to a recent and important agreement on broadcasting rights in Venezuela, Promar TV became the official production company for the Venezuelan Professional Baseball League (LVBP), in charge of the production of all matches for national and international channels and networks. Since baseball is the number one sport in Venezuela, Promar had the great opportunity to demonstrate its innovative prowess to carry out production and dissemination.

Jorge Santiago Kossowski, Head of Engineering at Promar, explains that, "The way we produce baseball games in Venezuela changed significantly during this season, as VC Medios obtained all the broadcast rights from the LVBP. We were hired to manage production for all the stations that wanted to buy the broadcasting rights of the matches. This includes each of the television stations in Venezuela, in addition to Fox Sports, ESPN en Español. So now we manage production for everyone."

Before the agreement, each station or television network was in charge of its own production and transmission, sending its trucks, cameras, cameramen and technicians to each stadium and each match. But everything has changed, and today Promar does everything under one roof, working with each station and chain to customize different transmissions  that correspond to the identity in the air of each of them.

The mission of handling such a large-scale production would be overwhelming for many, but Promar is no novice when it comes to producing content. Based in Barquisimeto, Venezuela, Promar TV is a successful media company with a track record of three generations. Jorge's grandfather, who emigrated from Poland to Venezuela in 1949, began producing films. He moved to television in his early days during the 50s, and in 1995 he launched Promar TV along with his son, Jorge's father.

Promar TV is today the largest production house and TV channel in Venezuela, with a technical infrastructure that allows them to classify as one of the groups of the big leagues of TV. And it's no surprise that Blackmagic's teams make up much of their arsenal.

How to fill all the bases

With production for so many stations and chains in charge of Promar, Jorge had to consider all angles and design an efficient production flow to support the variety of requirements. He says, "In the past, we were in charge of production for only one station: ours. But with the change in broadcasting rights, we had to take care of up to four channels or networks broadcasting the same game, and each one requires its own graphics and commercial segments. Likewise, each channel wants to have its own commentators on the court and in the press booths of the stadium. Each commentator requires their own camera mount to transmit their signal on match day."

In addition to meeting the individual needs of each station/chain, Promar has to take care of the party as such. This involves individual signals for the press booths and for the game referees. "This year there is a new rule in baseball: team managers can question the decisions of the umpire. It is then necessary that the umpire can reevaluate each play from different angles, and Promar is responsible for capturing and reproducing the instantaneous repetition exclusive to the umpires."

Jorge spent months testing equipment to make sure all the requirements were met. The workflow he designed to achieve it all is based on a new seven-meter OB tactical truck for external transmission, equipped with a 4K Blackmagic Design ATEM 2 M/E production router, a 72x144 Universal Videohub, four Teranex 2D, seven HyperDeck Studios, an UltraScope, a 3D UltraStudio and a large number of Mini Converters.

The large number of signals that Promar handles in each match requires a high-capacity video network. For this purpose, Promar invested in a Blackmagic Universal Videohub. "It is very compact, which makes it ideal and ergonomic for our new OB truck. But the main reason we acquired the Videohub was the ability it gave us to locate all 216 cables in a single unit, making wiring easier. Previously we had cables on all sides. When a technical problem occurred it was not easy to find the cause and we had to evaluate 144 cables. That's like finding a needle in a haystack."

Blackmagic Design's Atem 2 M/E 4K production router was the candidate in the equipment selection draft for Promar's OB truck. "The auxiliary connectors allow us to easily separate the transmissions for the different stations, and the ease of making different changes and transitions, such as sweeps and dissolves with the DVE, make it easier for each station to control the look they want for their own transmission," explains Jorge.

He adds that, "When you work with as many producers as we do (a different one for each season, on every baseball diamond) you need a router that is easy to use and familiar to every technical director. This season we will be working with eight directors, each with their own style and with their own way of placing the cameras, recorders, monitors and so on. We needed a router that would give us the necessary flexibility, without risking the quality of the transmission."

To simplify the workflow, Promar takes advantage of the auxiliary outputs of the Atem and marks the identity of each station with the main character generator (CG). This is done in the upstream key (USK) instead of the downstream key (DSK). The GC is distributed through a clean signal that is sent to the scoreboard board. One of the stations uses the main output of the router and the DSK. The other stations use the auxiliary outputs. Each of the outputs goes to a Blackmagic Decklink card that takes care of the graphics specific to each station. Each station has an operator who is in charge of the elements of the GC.

Promar's proprietary software integrates with UltraStudio 3D to visualize graphics on the filling and interleaving channels. The fill channel represents each individual chart and the interleaving channel, or alpha channel, informs the Atem how to represent the chart. The integration automates the graphics submission process, allowing each station to use its own graphical identity in the transmission.

Supporting multiple formats is another key feature that Promar's production was looking for. "Not all broadcasts in Venezuela are HD. We still have broadcasts in 4:3 format, which are standard definition, and in 16:9 widescreen format. We use Blackmagic Design's Teranex to handle all conversions. Time is money during a live production event and these fast processes are essential."

In addition to providing a wide variety of formats, Promar captures all angles of the match to preserve the material and for instant replay. To record the huge amount of content Promar has eight HyperDeck Studios.

"We have eight Blackmagic Design HyperDeck Studios intended to record each match, mainly for archival purposes," Jorge adds. "We do it in case there is an important moment during the match that is not part of the material that goes on the air live. For example, a player falls to the ground, but the director did not have that camera in the air or use it in a repetition. The next day, the team reports that their player has fractured an ankle and will not be present at the following matches."

The clean footage is recorded without any graphics, allowing Promar to edit it for promotion segments, trailers or for distribution to other programmers. Blackmagic Video Ultrascope completes the Promar team for its OB workflow, ensuring the high quality of every element of the content.

With a little help from Blackmagic, Promar has had a season of champions, proving that VC Medios' decision was right in selecting them to produce all LVBP matches.

No thoughts on “Changing the way baseball is broadcast”