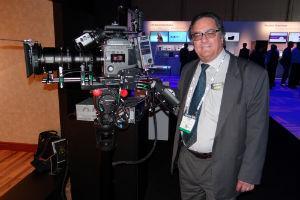 Friends and acquaintances received with surprise and nostalgia the announcement of the retirement of Andrew Nelles from Sony, known at NAB Show 2015, after 35 years of being linked to film and television.

A tireless worker, dedicated, passionate and good person, are the words with which they coincide in describing the friends, colleagues and those who at some point have shared with Andrew Nelles, who during NAB 2015 announced his retirement from Sony to dedicate time to his passions: family, travel and cinema.

In the midst of the farewell tributes and expressions of affection during the fair, he took a few minutes to talk to TVyVideo about these years in the industry. The tears in his eyes reflected the nostalgia as he recalled the experiences he had during the 35 years he has been linked to Sony, witnessing the technological developments and the friends he has made along the way.

"I came to the industry by accident. When I graduated from college in marketing, my future wife's family knew I really liked music and put me in touch with a small music company where I did what I liked. After six months of working there Sony bought us, that's why I did my whole professional life at Sony."

He remembers that his first years at Sony were dedicated to the audio part for studio recording in the United States, in the factory located in New Jersey. Those in charge of the transmission of the Mexican football league arrived there looking for some consoles to be modified for their transmission. This is how he met the director of Sony for Latin America who asked him to go and work with him in Panama, in the audio for video division.

In this way he was linked to the broadcast area in which he has witnessed all the technological transformations that have been seen in the industry. "I lived the transition from analog to digital and high definition, which was almost 3D and now the theme of 4K. In video recorders we have also had changes in the recording formats. It's been a lot of changes."

About his experiences he commented that coincidentally he began his professional life working in the audio part with some 'crazy' artists and creatives and that now, in the last years of his career, those crazy people looked for him to help develop digital cinema.

One of Andrew Nelles' great friends is Francesco de Ambrogio. He is Sony's representative for Chile through Videocorp and that is how he began a friendship that today has been going on for more than 30 years.

He commented that "With Andy we got to develop a very, very big friendship, working very hard. He gets up very early and so do I. That is why in all the fairs that we go we get together early to plan the day of work or to go out to record a video. Andy is a tireless worker. In addition to the work, we have also been linked by the taste of both for cinema, wine and gastronomy. We see each other about seven or eight times a year and we enjoy it quite a bit."

In the midst of laughter, Francesco de Ambrogio recalled many anecdotes lived with Andrew Nelles, especially one in particular. "Andy forgets things. Once he had his suitcase left at the exit of the Las Vegas airport. We all got in the taxi and when we arrived at the hotel he asked 'what about my suitcase?' He had to return to the airport and there was the suitcase where he had left it. And that became the saying of the fair 'what about the suitcase?'. Nonsense like that there are innumerable.

Finally, the Director of Videocorp indicated that it is a pity that he resigned but it was his decision. "We will need it a lot. They say there is no one irreplaceable but for sure for Sony to replace Andy will be very difficult."

The uncle of 'The Family'

Being the son of an American civil engineer who built works throughout the continent, since Andrew Nelles was born he has spent his life traveling. His father was working in Colombia where he met his mother and that's why Andrew is from the city of Cali. There he lived his first year until his father was transferred. This happened in Puerto Rico, Venezuela, Peru, Ecuador and in several cities in the United States.

Travel has also been part of his professional life. In the different positions he has held at Sony for the United States and Latin America, Andrew Nelles has spent part of his time on a plane traveling visiting customers, distributors, fairs and film and television festivals. On those trips he has managed to make great friends, but there is a particular group known as 'La Familia'.

For years, Andrew Nelles, Daniel McDonald, also of Sony, and Francesco de Ambrogio, have achieved a friendship that surpassed labor issues and has become almost a myth within the industry. The three formed a group called 'The Family', which does not miss an opportunity to meet when the three agree in a city, to enjoy a good wine and a good meal.

Francesco de Ambrogio said that although many know about these meetings and constantly ask them where they are going and what they are going to do, it is a closed space only for the three of them, in which they do not allow anyone else to participate. "We are a family because I am the father, Daniel is the son and Andrew is the uncle. Every time we meet we had a great time."

He's leaving, but not quite

Although on the first of June Andrew Nelles officially retires from Sony and will move to France with his wife, from where they plan to continue traveling and getting to know Europe and the winters to spend in Florida, he will not get away from the industry completely, because he wants to continue enjoying cinema, which is one of his great passions. "I hope to continue participating in film festivals and some activities with Sony for Latin America. I'm a big fan of cinema."

As a good fan of cinema, he highlighted the development of this industry in Latin America and how it has served to mark the adoption of new technologies in television. "In Latin America there was very little cinema that was made before and many of those who made films were linked to the channels. As cinema has always used the best technology, they brought ideas to the channels and partly because of that is that the productions of the big Latino channels have cinema quality. And the films are of high quality and with projects of international stature."

And with nostalgia but with a smile on his face, Andrew Nelles left a message for his friends: "I going to enjoy my new life."

No thoughts on “Andrew Nelles is going to enjoy life”