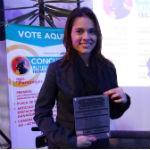 Colombia. A university work and the dedicated support of the teacher, were the first steps taken by Diana Lucía Viola, a student at the Pontifical Bolivarian University of Bucaramanga, to make the audiovisual piece that won the second version of the TecnoTelevisión 2014 University Contest.

The initial video was made by a group of students of the eighth semester of Social Communication. When presenting it in class, Professor Fidel Sánchez recognized the quality of the topic and proposed that they modify it to send it to the TecnoTelevisión Contest.

The problem, according to Diana Viola, was time. The day of the teacher's proposal and the closing date of the Contest, only separated them by a week. Due to the occupations of each of the members of the group that performed the initial work, only Diana had the availability to adapt the video to the requested requirements. Her classmates gave her free rein for her to compete.

Remember that that weekend was a lot of work. He had to write a new script, record interviews and images, all under the supervision of Professor Fidel Sánchez. The Faculty also provided support by facilitating the editing room to finish the work. Thus, he was able to finish and send it just on the closing day of the call.

Voice commands, as it was called, tells the work being done in the Faculty of Electronic Engineering of the Pontifical Bolivarian University of Bucaramanga, the engineer Fabio Guzmán, together with his students, developing applied technology for cases of disability. As a result, they manufactured the wheelchair with voice commands for people with quadriplegia.

After the selection of the five finalists of the TecnoTelevisión Contest, chosen from among all the works that arrived by a jury made up of Olga Castaño, Juan Carlos Villamizar and Asier Carvajal, who guaranteed that whichever the winner was among those five was going to be a quality audiovisaul piece, the winner was defined by virtual voting in the 15 days prior to TecnoTelevisión.

Taking advantage of the experience gained in a previous job as a community manager, Diana Viola began to campaign to get votes through her social networks. Then different dependencies of the Faculties of Communications and Engineering were added, which sent internal emails promoting the vote for the work Voice commands.

The campaign quickly went viral and reached the Caracol Radio station, which from its regional programming interviewed Diana Viola and invited her listeners to vote as a way to support Bucaramanga's talent.

The results of this campaign were not long in coming and the work Comandos de Vos obtained 60% of the more than five thousand virtual votes counted through the TecnoTelevisión website.

As part of the award, she received a plaque recognizing her as the winner of the TecnoTelevisión 2014 University Competition and a professional video camera of reference AG – AC160 from Panasonic, a company that this year sponsored the award as a support to future professionals in the industry.

Participating and winning the TecnoTelevisión University Contest gave Diana Viola pleasant experiences. First, he achieved the objective of disseminating the important developments that are being made in the different research groups of the university.

Second, it opened a door that will allow you to explore other career options. Although he has always liked audiovisual, that is not the strength of his career. Therefore, the Contest was a motivation to follow that path.

"The Contest showed me that from the academy, being a student, you can do professional work, of quality, which can have repercussions and remuneration. It is a pride for me, a recognition, the most important thing I have on my resume for now. It was a very nice experience," he concluded.

No thoughts on “Voice commands, winner in 2014”