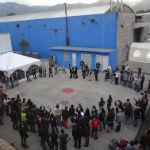 The 2014 was a special version of TecnoTelevisión. The novelties of the fair were well received by visitors, who participated massively in all the activities of the fair and were able to update themselves with the latest technology through the conferences and the commercial exhibition.

The figures support the above claims. In two days of the fair the exhibitors attended 3,548 visitors, while in 2013 1,350 attended. The three conference rooms were always full, highlighting the interest in updating and training.

In addition, the opinions of the exhibitors confirm this. Carlos Iván Fernandez, from the companies Seel and Qparts, expressed his satisfaction with the quantity and quality of the attendees. In the same sense, Luis Endara, of Antenas Latinas, added that it was a success to add the radio theme to the event.

Keiko Watson, general manager of Shotoku Broadcast Systems, acknowledged her satisfaction after participating in the seventh edition of the event held in Bogotá and evidenced her joy at having a high flow of visitors through her stand. "We have had the opportunity to serve many people and advance important contacts this year in TecnoTelevisión, which makes us believe even more that the market in the region is very good for Shotoku and that it has enough potential for the future."

Another manufacturer that was present was AJA Video Systems, a company that has been in the Colombian market since 1993. Manny Rosado, in charge of serving the regional market, highlighted the importance of Latin America for the company.

From Brazil, Argentina and Mexico, companies also came to exhibit their products. Founded in 1996, Comerciall specializes in stage lighting as well as infrastructure for audiovisual production in the Brazilian market and now seeks to gain a foothold in the Latin American region.

Following the lighting segment was Fluotec, a company founded in Mexico with the specific purpose of developing and manufacturing fluorescent light luminaires and which today is a leader in LED development. From Mexico was also VideoStaff, a company that took advantage of the participation in the fair to announce its arrival in Colombia with the opening of a store in Bogotá specialized in accessories for photography and video.

The main novelty of the last version of TecnoTelevisión, was the inclusion of the radio theme, both in the conferences and in the commercial exhibition. The expectation to know the response of the attendees on this subject was great and to the satisfaction of all was very well received, making the space for the conferences small.

And not to mention the panel, which had to last an hour longer than estimated because the attendees did not want to let go of the panelists, Alberto Sierra and Juan Fernando Muñoz, who provided a detailed analysis of the current situation of the radio, showing off the fine humor that characterizes them.

The new developments in terms of cables, microphones, consoles and other innovative systems that make it possible to combine radio with a video channel through the Internet, were part of the solutions presented by the exhibitors for attendees looking for the latest technologies for radio.

In the 2015 version there will be several novelties that TecnoTelevisión will have. The commercial exhibition will be larger, both in size and time, because one more day of the fair will be added, being three days of exhibition. In addition, the space will be larger than in 2014 because it will occupy two floors of a pavilion. On the academic side, radio lectures will be increased by one day.

TecnoTelevisión 2015 will be held between November 10 and 12 in Hall Six of the Corferias Convention Center.

No thoughts on “TecnoTelevisión was strengthened with radio”