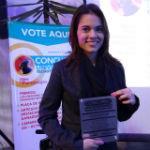 Colombia. Within the framework of TecnoTelevisión 2014, held on November 6 and 7, the winning work of the TecnoTelevisión University Contest was known, which this year reached its second version.

The winning work, defined by 60% of the more than five thousand virtual votes counted through the TecnoTelevisión website, was Voice Commandos, an audiovisual piece presented by Diana Viola, a student at the Pontifical Bolivarian University of Bucaramanga.

In its synopsis, the work is described:

"In the Faculty of Electronic Engineering of the Pontifical Bolivarian University of Bucaramanga, engineer Fabio Guzmán, together with his students, develops applied technology for cases of disability. As a result of this, they have manufactured the wheelchair with voice commands for people with quadriplegia. Such is the case of Jesús Méndez, a young artist dedicated to painting who has been the first beneficiary of this project".

As part of the award, Diana Viola received a plaque recognizing her as the winner of the TecnoTelevisión University Competition in 2014 and a professional video camera Panasonic, reference AG – AC160.

No thoughts on “Diana Viola, winner of the TecnoTelevisión University Competition”