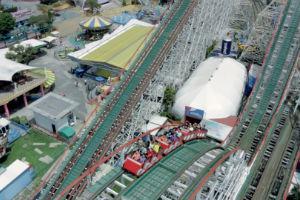 Juan Carlos Elías, produces, directs, films and finalizes the commercials that Katarsis Films creates continuously. He founded the company as soon as he finished his film studies.

Katarsis Films is a small company but its projects are all the big. An independent production company based in Mexico City that was commissioned to produce a national commercial for the Chapultepec Mágico Fair. Until recently its Infinitum Mountain broke the record as the first roller coaster in the world to take its passengers through three fully vertical loop turns. Today the Fair celebrates its 50th anniversary offering its visitors unlimited fun that they will never forget.

Katarsis only had three days to perform the project, and a single day to capture the extreme excitement of a 50-meter free fall. This challenge was made even greater by the cloudy sky that accompanied Juan Carlos Elías, founder of the company, and his team during the eight hours of filming.

"It was a day of crisis," recalls Juan Carlos. "We needed three or four cameras recording everything simultaneously." Katarsis' plan for multi-camera shooting included the Blackmagic Cinema Camera and pocket Cinema Camera to capture all the necessary footage.

The thrill of vertigo

When watching the commercials for the Fair, it's hard to avoid the feeling of butterflies in your stomach, watching park visitors fall from extreme heights and shake back and forth at attractions like the Mad Mouse. To reflect the amount of excitement, a group of young actors were given the mission to enjoy the many attractions of the Fair. But as the boys rejoiced, Juan Carlos and his team faced one challenge after another.

Due to the impossibility of filming inside the structures, they used the Octocopter – a helicopter of eight propellers for cameras – and a Dactylcam, similar to a motorized dolly that travels by a cable suspended in the air. This high-tech equipment allowed Katarsis to record material from almost every angle and at all distances.

"We were 200 meters from the wagon and the Pocket Cinema camera, in particular, was quite fast and moving fast because it is very light. With the Octocopter, we were able to get material from the guys in the wagons from long distances, but the helicopter can only fly five minutes when it carries the larger cameras. With the Pocket Cinema camera, it can fly more than seven minutes due to its weight. Those extra two minutes are crucial when you have such limited time to roll. In addition, the camera records in RAW format, which also saves us time in post-production."

The Dactylcam passenger-led the Pocket Cinema Camera, aligning it with the roller coaster rails to capture the dynamism of the carriages rushing at high speed towards land. "The wide dynamic range of the camera was very important for us, as we were able to acquire more detail in the material and turn the cloudy weather into a sunny day," said Juan Carlos.

After finishing the one-day shoot - the only chance to get the required material - Katarsis only had three days to turn it into a commercial ready to air on national television. Working from a wide variety of formats, including RAW, DMX and MP4, Juan Carlos and his colleagues had to achieve the magic of transforming the material of a cloudy day into an attractive, coherent and sunny commercial.

"We had to do it all in post-production. The material of each camera was different. It was very complicated, because on a cloudy day the light changes a lot, sometimes gray, sometimes darker."

Despite the challenges involved in filming during a cloudy day, Juan Carlos knew that one of the advantages of using the Blackmagic Cinema and Pocket Cinema cameras would be the ease of manipulating the cloudy sky to get a perfect day at the Fair.

"Since Blackmagic cameras record in RAW, if you don't get an ideal image, you can improve it later. And this expands the space for creativity. So at the end of the day, it helped me a lot during post-production to know that I could grade the material from the Blackmagic cameras to get an equal look in all the images."

For Juan Carlos, this kind of color correction could only be achieved with the help of DaVinci Resolve. He explains that, "First, we uploaded the footage from all the cameras to DaVinci Resolve. Then we export it to Apple's ProRes HQ format for editing. Once we finish the cut, we send a copy to the sound studio and export it as XML from Final Cut. Finally we re-import the material directly from the cameras to the DaVinci Resolve timeline to grade the color with the highest quality material and not lose any information. We quite like DaVinci's ease of handling all the formats we shoot in."

He added that the main goal during color correction was to create a uniform look, so that the differences between the cameras would not be noticed. Likewise, it was necessary for the cloudy day to look sunny. He was able to change the color of the sky by just adding a little blue to the whiteness of the clouds, a little saturation and contrast using the color selection tool to change the color of the sky from gray to blue. The end result looks like a perfect summer day.

A sigh of relief

The four hasty days to realize the project seemed like a slide trip compared to a normal production. Despite the ups and downs, everything turned out well, and by that Friday, commercials were already on the air on national channels 2, 4 and 5 in addition to four or five other pay channels." We feel happy. When we saw the finished material after the post-production process, it was a fantastic moment," concluded Juan Carlos.

No thoughts on “A day at the fair”