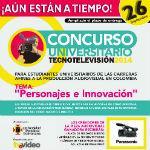 Colombia. A high-level jury will be in charge of defining the five finalists of the second version of the TecnoTelevisión University Contest:

Olga Castaño, is a doctor in public communication from the University of Navarra. He currently represents universities on the National Television Board of the National Television Authority. She has extensive experience in academia, was dean, research teacher, coordinated the project for the creation of Canal U and was director of programming for Teleantioquia.

Asier Aguilar, is a communicator at the Pontificia Universidad Javeriana and is currently a producer at Caracol Televisión. He has worked as an executive producer of television series such as "First Lady" and "The Selection".

Juan Carlos Villamizar, studied cince and television. Today he serves as executive producer of Caracol Television. He has an extensive career as a producer and director in outstanding national productions such as "Pedro el escamoso" and "La Saga".

Until September 26 there is a deadline to send the works participating in the second version of the TecnoTelevisión University Contest.

The creators of the winning audiovisual piece will receive:

No thoughts on “Defined juries of the TecnoTelevisión University Competition”