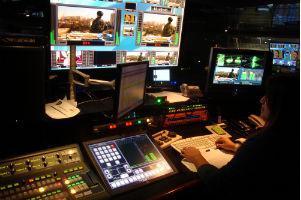 When the Mexican network Televisa began to migrate its systems from SD to HD, it did so in parallel to a tapeless workflow, both in its control room and for the production of news, sports and programming of series  and telenovelas.


Behind the flat façade of a building located on Avenida Chapultepec in Mexico City is Televisa's broadcast control room, on a high floor, behind a 50-foot stained glass window. The place has an air reminiscent of the main bridge of the Starship Enterprise, with everything and its sliding automatic entrance doors. However, the emphasis on the future that permeates the environment is not a mere decorative motif. It forms the basis of an extremely careful planning process, in which nothing is left to chance.

Thus, when Televisa engineers decided that the end of the life cycle of all the SD video servers they had installed for domestic broadcasts was approaching, they also made the decision that the servers that would replace them should not only provide the additional capacity they needed, but also process both SD and HD signals in a new workflow that dispenses with videotapes.

Shortlisted suppliers who were invited to propose their products were required to do more than document specifications or do a short demonstration. The four were asked to successively install their equipment in Televisa's broadcast center and allow it to be tested for several weeks. Only then did Televisa choose Harmonic Spectrum's media server and the scalable MediaGrid shared storage system.

The workflow
The first Spectrum media servers were provided to Televisa by the distribution channel of Harmonic AM Tecnología (Amtec). The spectrum server's open architecture also met Televisa's requirement that the system could run smoothly with Aveco's automation system and Tedial's Media Asset Management (MAM) system.

As a transmission control center, which manages four transmission networks, Televisa's facilities have ever-changing needs. Consequently, as soon as the servers were installed, with MediaGrid  for storage with on-site editing functionality, Televisa decided to change its institutional MPEG-2 Long-GOP video format to DVCPRO50.

The transition from mpeg-2 format to DVCPRO50, which took place the following year, was easily implemented by Harmonic, with only one license change. But the format change also meant an increase in the bitrate, which meant that a greater storage capacity would be needed permanently.

"One of the benefits of the system that we valued most from the beginning of this process was its modularity. When our needs changed, we were able to move our Spectrum Media Port video I/O modules from one system to another," said Armando Medina, technical director of network transmission operations at Televisa (Canales).

In fact, the operation of the system is so simple that we were able to perform this procedure ourselves without having to go to any of our Harmonic or Amtec support technicians. This is precisely one of the things we like most about this solution: the system is configured in such a way that we can make changes like this without major difficulties. We also valued the fact that we could employ different sizes of disks within the same system as our capacity expanded."

For the next three years, Televisa's broadcast operations were based on two control rooms, one for SD signals and one for HD signals. That year, the engineering team concluded that efficiency and quality could be improved by unifying both signals. In this way, Televisa acquired a new Spectrum system to accommodate a new workflow with a single HD control room from where the emission of the SD signal would be generated through subconversion. This massive transition, done with Spectrum, meant transferring all the original files from the SD servers to the new HD servers, and then using MediaPort with its upconversion feature to stream those SD files in HD.


The following year another massive installation of Harmonic equipment was carried out, following  the creation of a headquarters for computer disaster recovery, a backup system for Televisa Chapultepec located 15 kilometers from Televisa Santa Fe, a modern complex that also includes three TV studios and post-production facilities.

Aveco's automation system controls replication between the two systems, which support not only computer disaster recovery, but also the regular maintenance of transmission operations by allowing any of the channels to be controlled from Santa Fe, while improving techniques in Chapultepec. Harmonic's PlayTool and ProDrive™ software tools are used in combination with backup hardware to provide a level of protection and backup to the regular automation system.

Parallel to the start of the HD service, Televisa was migrating to a tapeless workflow, not only for its Chapultepec control room facilities, but also for the production of news, sports, and drama series programming (telenovelas). Now all this is handled through file-based workflows, which have evolved considerably since the beginning of this project.

Because the entire editing process is currently file-based, it is possible to store a single master copy of each program in MediaGrid using Tedial's MAM, and most of the material is HD through the entire signal path. One of the most important factors that have influenced this transition has been the use of Active Format Descriptors (AFDs), programmed and enabled within Media Port systems as part of the workflow. Using AFD allows upstream or downstream conversion of a single file as needed, no longer requiring additional storage of HD or SD files within Spectrum servers.

Even with these levels of efficiency, Televisa has doubled the size of its Media Grid facility over the years. HD is currently being used, which is equivalent to three times the capacity. The system effectively doubled in bandwidth when it doubled in size. At the santa Fe backup headquarters, the latest version of Media Grid was used, placing Televisa in its third generation of the storage system. Meanwhile, each of the four networks has gone from transmitting two channels to 16 audio channels.

"We transferred a huge amount of files to MediaGrid, and that's where our on-site editing is done, using Final Cut Pro. They edit directly  in MediaGrid, then the files are put in a folder that is operated by Tedial's MAM. MediaGrid is used as a central repository and access point from which files can be extracted and then sent for transcoding, when needed.  Altogether, we have 12 Final Cut Pro stations making on-site edits, and 25 transcoders creating low-resolution proxies," explained Jorge Cosio, technical director of Televisa's transmission center.

The result
The tapeless environment supported by Harmonic Spectrum MediaGrid systems has had a decisive impact on Televisa's workflow, not only for the control room, but for all those working on the preparation of broadcast content.

"Before, we had to edit on tapes, a very complicated process," Medina recalls. "Now all this is done in a single file stored in our MAM. Before, we had to operate practically two transmissions, one in SD and one in HD. Now, most of the material is HD, and when we need SD signal, we use Harmonic Media Port to subconvert it."

"I would say that we have achieved a much higher level of efficiency thanks to the whole process," adds Cosio. "The overall workflow is much faster. We have been able to maintain a much higher level of quality thanks to the fact that we have a file that can be used repeatedly without deteriorating the quality in the process. Now the time required to carry out the processes is much less than when we used tapes.

Also, operating in this way has been more economical, since less machinery needs to be maintained, there are fewer human errors and even the amount of labor has been reduced, so that we can do more with fewer operators. Another excellent benefit is that we can employ low-resolution proxies to plan the sequence of programs, instead of having to work with more cumbersome high-resolution files. And we can do this only once, whereas before it had to be done several times."

No thoughts on “Televisa renewed workflow”