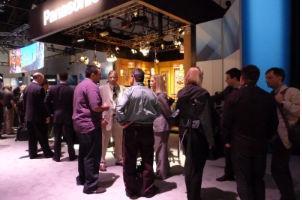 From the fifth to the tenth of April, a new version of the NAB Show will be held in Las Vegas, United States. The novelties focused on 8K will be one of the main attractions.


During the last version of NAB in 2013, 4K technology was the protagonist. Most of the companies presented systems and equipment focused on ultra high definition and all attendees were left unhappy with the quality of the image.

The interest in this technology in Latin America reached the point that for the World Cup, which will be held in Brazil in the middle of this year, the Globo channel, in partnership with Fifa and manufacturers, will make live broadcast tests of some of the matches under 4K technology, confirming once again that the big sports competitions are the perfect scenario for the broadcast industry to test its new technologies, as happened in South Africa 2010 with 3D.

But while waiting for the results of these tests, nab 2014 will already be talking about 8K. And it is not that it is the first time, since last year there were some prototypes on 8K. But this year the big news will be the demonstration of a closed circuit 8K over-the-air transmission content on a single 6MHz UHF TV channel.

This 8K test will be carried out by the Japanese public broadcaster NHK, through which it will present the latest version of its Super Hi-Vision system, within the framework of what has been called FUTURE Park of NAB Labs. This will be the first time anywhere in the world outside of Japan that an 8K Super Hi-Vision wireless transmission will be made through a single 6MHz television channel.

The Japanese channel will have a showroom in which they will locate a 350-inch screen for the display of newly taken Super Hi-Vision content, with 8K video projection and full 22.2-channel sound reproduction, of images recorded at the Sochi Winter Olympics.

Also 8K equipment
In addition to live testing, progress in increasing the viability of Super Hi-Vision systems will also be demonstrated, including an 8K video camera weighing less than 4.5 pounds (2 kg), the first 8K encoder with REAL-time HEVC capability, and an immersive display integrated into the sound system that provides the virtual representation of 22.2-channel sound for a home environment.


They also plan to showcase the latest developments in hybrid TV with a presentation of their "Hybridcast" system, which provides interactive capabilities through a converged broadband/broadcast service, which was launched last September by the regular consumer service in Japan.

NHK is one of 15 organizations presenting this year's demonstrations at NAB Lab's Future Park, a section of the fair reserved for dissemination-related research and development projects from around the world.

This is just one of the technological innovations that manufacturers of systems and equipment for the industry will be showing at NAB, in which you can know where television is going. The organizers emphasize that this year it will be possible to know the technologies that will be offered by 204 companies that for the first time will be present at the show. In total there will be about 1,600 companies that will be on the exhibition.

Multiple conference rooms
Although the NAB exhibition begins on the seventh of April, from Saturday five there are many events that are scheduled around the fair, such as private presentations of the companies and NAB's own conferences. The fair has an extensive program that addresses topics of interest to the industry from engineering, administration, cloud, certified courses in post-production, among others. There are other sessions that are free, such as the IABM that analyzes the state  of the industry.

For 2014, the inaugural session will be significant for Latin America. On this occasion, the session will be presented by NAB President and CEO Gordon H. Smith, who will be joined by Haim Saban, President of Univision Communications, founder of Saban Capital Group and the Saban Center for Middle East Policy at the Brookings Institution.

This is just one of the featured characters who will be at the NAB conferences. The list includes Mark Ramberg of Amazon Web Services; Roy Sekoff, founding editor of The Huffington Post and President and co-creator of HuffPost Live; just to mention a few.

Within the framework of NAB, Connected Media World will also be held, an event that focuses on the connected consumer experience, taking into account that platforms are multiplying faster than ever. The phenomenon by which TV becomes IPTV, .mobile becomes social, social goes to the cloud will be analyzed. As a result, it is now the consumer who is in control and they are demanding a fully connected, interactive, personalized content experience.

There are many events that take place within the framework of the fair. Therefore, analyze what your interests are and take a good look, because six days will not reach.

Appointment for Latinos in NAB
For the second consecutive year, Latinos will have a space to relax from so many appointments and so much technological information, sharing with colleagues from the region in the Cocktail organized by TV Y VIDEO magazine, in partnership with NAB Show.

This year, the Encuentro Latino will be held on Wednesday, April nine, the International Trade Center of las Vegas Convention Center, located in the South Hall, Upper Lobby. The appointment will be at six in the afternoon, immediately after the closing of the fair. See you in Las Vegas!

No thoughts on “And this year 8K”