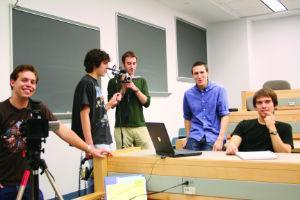 This is the first installment of a series of articles whose purpose, from the academy, is to think about the great challenge that the implementation of Digital Terrestrial Television in Colombia brings for all agents of the audiovisual sector, with worldwide projection.


As Cristina González mentions in her book New television strategies: The digital challenge, identity, brand and television continuity, there are four key issues that arise from the implementation of DTT, and that have already been experienced in countries where the analog blackout was made some years ago: the evolution of the business,  the irruption of television over ADSL and IP  networks and the prospects of new services and formats.

This series, carried out by the professors of the Pontifical Bolivarian University, Luis Jorge Orcasitas Pacheco and Luis Fernando Gutiérrez Cano,  raises the following themes, focused on the new processes of digital communication focused on the media convergence that allows interactivity in the process of transmedia and crossmedia. Series that is oriented from the development of digital terrestrial television in the DVB-T2 System and digital pay television,  to achieve innovative products and / or services, which captivate users of this new form of television

This series called Challenges of the implementation of Digital Terrestrial Television in Colombia begins with the first installment: Digital Terrestrial Television in Colombia and demands of the sector, from the possibilities offered by television from its access, use and appropriation,  proposals for social-technological innovation, of products and processes that the various actors of Digital  Television can generate and propose to the Colombian audiovisual sector.

DTT and demands of the sector
The implementation of Digital Terrestrial Television in Colombia is undoubtedly the great challenge for all agents of the audiovisual sector, not only in Colombia but in the world.  As González (2008, p.61) mentions: "There are four issues considered key in this process: the transition to Digital Terrestrial Television (DTT), the evolution of the business of cable and satellite television operators in the new digital scenario,  the emergence of television over ADSL and IP networks,  and the prospects of new services and formats such as mobile television and high-definition television".

Digital television in recent decades has been one of the vital topics of discussion in  different scenarios,  from communication to the technologies that it contains as a result of the new possibilities of services and content that arise with the definitive  step of this new type of "making television" and exploring it commercially and culturally.

Positions of commercial actors and specialist-researchers

In this sense, it is important  to mention  the diversity of theoretical materials that have been analyzed on this subject and, above all, the feeling of an unfinished path that is in full effervescence. As digital television is configured, it is visible to perceive different positions ranging from economic, political interests and those of the audiovisual sector as such. From this panorama, according to  Said Hung (2009, p.42), two positions are perceived:

On the part of commercial actors: to be in a privileged position that helps them obtain economic returns in accordance with the expectations  and technical possibilities that digital can offer in the future.

On the part of the specialists/researchers of the sector: who try to understand the technical and socio-cultural dimensions that digital  progress in the audiovisual and telematic field brings.
In accordance with the above,  the implementation of digital television in our country has generated great expectations around digitalization in the audiovisual field, which for some experts, would mean the most radical  change that has been experienced for now, "Compared on many occasions with the transition from black and white television to color television."

In Colombia, after  more than two years of analysis and studies, in August 2008, the National Television Commission (CNTV) adopted the European DVB-T standard for digital terrestrial television. Since 2006, Radio Televisión Nacional de Colombia –RTVC– has been developing its strategy for the implementation of Digital Terrestrial Television (DTT); the National Television Commission (CNTV) allocated resources to RTVC for testing in the cities of Bogotá, Pereira and Cartagena, which served as the basis for the adoption of the European DVB-T / MPEG-4 standard in August 2008.
Context trends

After adopting a standard it is necessary to carry out a diagnosis that the trends of the context from the political-legal, economic, social-demographic and technological perspectives. Next, in the table called Trends of the context,  the needs and situation of the economic, cultural and / or scientific sectors of the region and the country are presented, as a synthesis, before the eminent implementation of digital television in our country.

Moving from analog to digital
Currently, what follows for Colombia is to continue  the process of implementing DTT in large cities such as Bogotá, Cali, Medellín and Barranquilla. Since 2010, the country has a test laboratory for DTT, in which the chain of compression, transmission and reception of the DTT signal is simulated. For these tasks, human resources in DTT have begun to be trained  and interactive applications are  being developed to give added value to the contents of RTVC, two of the fundamental aspects on which the proposal of the Master's Degree in Digital Television proposed by the Pontifical Bolivarian University of Medellín focuses.

To observe what is the transition from analog to digital, the CNTV has been working on the coverage studies for DTT in the Colombian territory. See the illustration called: Analog (current) and digital (projected) signal coverage map

Implementation by the national public operator
In the document Digital Television for All (2013). Digital television for all, from the  National Television Authority. Colombia establishes that: "Under the aforementioned regulatory framework, Article 11 of Agreement CNTV 002 of 2012 establishes the percentages of deployment in DTT for the operator of the public national network, from the beginning and during the period of issuance of digital signals with the DVB-T and DVB-T2 standard, as follows: The national public operator must achieve in its territorial scope, a population coverage with the digital broadcast open television service in accordance with the following plan. See Digital Television Implementation Plan in Colombia


Also in the same document, it is mentioned that the Radio Televisión Nacional de Colombia -RTVC-, in its capacity as manager and responsible for the administration, operation and maintenance of the national public transmission network, in accordance with the provisions of Decree 3550 of 2004, has been carrying out the necessary actions and procedures to advance the contracting processes for the selection of suppliers of goods and services for the execution of the resources allocated for the deployment of the digital public network in Colombia within the deadlines determined by the defunct National Television Commission.

It is important to highlight that, since the 90s, the transformations initiated in previous decades have been consolidated in several countries of the world, especially in the generation of content and services in the audiovisual sectors, a situation that barely has a small beginning in our country, mainly in the providers of subscription television (UNE, Claro and Telefónica) and satellite television (Direct TV).

As university professors we consider that from the Colombian university you have the possibility – as it has been doing – to link to the structure of digital television, from an analytical, reflective, proactive and academic position, in order to support, for research and product development purposes,   the phenomena of convergence between telecommunications and information technology, and the processes of interactivity and, in a certain way, become an entity that promotes  democratic digitalization and continue to insist on television as a public service, a place for everyone and for all.

Reflections to which different sectors such as the State, the company, the organized community must be articulated aimed at the promotion  of democratic digitalization, always considering as ordered by the Colombian Constitution television as a public service:


Digital convergence
With digital convergence it  can offer a strategic vision of management and production processes and programming in television, providing theoretical and technical knowledge for  the development of the dynamics of realization, programming, audiovisual exhibition and commercialization.

It is pertinent in this sense that the country and its regions, both in the public and private sectors, are updated in the access, use, management and appropriation of digital television, because finally it is these estates who must strategically guide the incorporation and development of television  in the fields  communicative, informative and innovative in Colombia.


The following table called: Situation  by sector or performance  environment -local, regional or national- policies, plans, programs presents the sectors of television in which Colombian television exerts influence versus the demand for opportunities and performance potentialities that is required in a new political configuration, economic and social television in the country.

*LUIS FERNANDO GUTIERREZ CANO
Social Communicator Journalist from the Pontifical Bolivarian University, specialist in television from the Javeriana University and Master in education from the Tecnológico de Monterrey. University professor, producer, director and television programmer. In his professional performance he was programmer of Canal Capital, director of Arriba mi Barrio and Para Vivir Mejor (Pontifical Bolivarian University) and  producer of En Rojo y Negro of the same university. He received the Emmi Award for the strong support of the special in Sintonía con los niños (Canal Capital), the India Catalina, the Armando Devia Moncaleano and the Amway Award for the best university television programs in the country.

No thoughts on “Challenges of DTT in Colombia (I)”