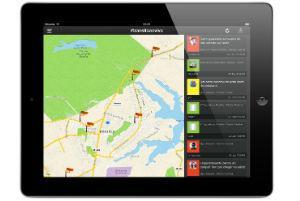 Through a multimedia server, the transfer of live video for the traffic monitoring application "#trânsitoaovivo" in Brazil is supported, which has had very good acceptance by the population of influence.


Based in Brazil, 2 Mobile Marketing Digital LTDA is a developer specialized in the creation of institutional software for companies. His latest project, #trânsitoaovivo, which works with the Wowza media server, is an innovative application to visualize traffic from mobile devices that allows users to view live video images of the main highways and intersections of Brasilia (Brazil).

Launched in April 2012, the app has been very well received by users, thanks to the fact that it is easy to use, stable and has features for sharing on social networks. In addition, it is in a rapid process of expansion that seeks to add new features and transmissions to its service.

The growing traffic problem in Brasilia
Brasilia is a planned city, built in the 50s, that combines landmarks of modern architecture with a visionary road design. Large highways connect the main points of the city, allowing drivers to cross long distances without having to stop at traffic lights.

However, as a result of Brazil's growing economic development and the increase in population in the communities surrounding Brasilia, this city is experiencing many of the traffic problems that afflict the rest of the country: congestion at peak times, insufficient parking and increased traffic jams. Because of all this, Brasilia had to expand its road infrastructure and incorporate more conventional ways of traffic signaling, like any other major city.

To complicate matters, Brasilia will host two of the world's most important sporting events over the next four years. In 2014, the World Cup matches will take place in Brasilia and in 2016, the city will host the football matches of the Olympic Games in Rio de Janeiro. Therefore, the city's traffic volume is expected to continue to increase over the course of the next few years, as large infrastructure projects and a greater number of tourists make their way into the city.

Seeking to alleviate the problem, Brasilia installed traffic cameras at strategic points across the city to provide motorists with real-time video of evolving traffic conditions. However, transit videos did not allow online integration and users could not access them from their mobile devices. As a result, the solution only reached a small number of drivers.

In addition to traffic issues and upcoming international sporting events that could worsen the situation, 2 Mobile also identified the limitations of the current traffic monitoring system. Consequently, the company saw an opportunity there to transfer live video from traffic cameras directly to mobile devices and allow those viewing the material the opportunity to comment, share and interact through social media communities.

Other companies had already started streaming content from traffic cameras to mobile devices, but none of them had managed to stream live video. The apps were limited to providing continuous "live" photos, which reduced the quality of the users' experience. The biggest challenge for 2 Mobile was finding a way to ensure a continuous, uninterrupted live video stream on an internet infrastructure that was known for crashes and outages.

To generate revenue, 2 Mobile planned to sell advertising on its live traffic display app. However, advertising had to be incorporated directly into the screen, without compromising the viewing experience. The model's success also depended on the ability to reach the largest number of viewers, which meant that 2 Mobile would have to make its streams accessible to a wide range of mobile devices, each with its own set of transfer protocols and player technologies.

2 Mobile tried to maximize the viewing experience by integrating with social media. By allowing users to comment, monitor and share last-minute traffic information on Facebook, Twitter and directly through the app, the solution would create a virtual community of drivers that would help increase the service's popularity. Also, because 2 Mobile was relatively new to the market, the solution had to be economical, easy to set up, and easy to operate for both administrators and users.

Users can download the app directly from the Apple App Store or from the Google Play Store, depending on their mobile device type. Unlike what happens in the United States, more than 60% of Brazil's mobile customers use Android devices, although the iPhone is gaining ground and there are also a large number of Windows Phone users.

Additionally, the Wowza media server is the only solution that allows intuitive transfer directly from the IP cameras that are being used in the nine bottling points of Brasilia. The software also allows 2 Mobile to store data directly on a local server, significantly lowering its storage costs.

To address the country's unreliable internet infrastructure, 2 Mobile employs Wowza's nDVR AddOn, a networked digital video recorder that removes local recording storage requirements from computers and transfers them to the server. With Wowza's nDVR, 2 Mobile can record the last minute of live video to use as a backup, in case an internet failure occurs. The result is a continuous live video image without interruptions, which mitigates the problems that the country has in its broadband infrastructure.

In addition to viewing live video footage of traffic, coming from nine different cameras, users can read Twitter comments to get a more complete picture of the most up-to-date traffic situations. Users can also map highways with alert buttons to inform other drivers about accidents, slow traffic and fluid traffic or to share information on where to find the best fuel prices at different gas stations across the city.

In addition, users can also share information about their cars, separate maintenance appointments, send direct messages to other users, and post comments on Facebook and Twitter. All of these features contribute to expanding the #trânsitoaovivo community. Moreover, a participatory audience also allows 2 Mobile to do better monitoring of its service.

Users are ready to report in a matter of seconds to #trânsitoaovivo administrators about faulty cameras and faulty images, right after the failure occurs, creating a more responsive application that conveys confidence to its users. To enable these types of sharing experiences, Wowza's additional application programming interface (API) (plug-in) makes it easy for 2 Mobile to take existing code modules from its infrastructure and deploy them to the Wowza media server.

"Wowza's media server is economical, easy to use and allows 2 Mobile to transfer to different platforms using a single solution," said Nivaldo da Silva of 2 Mobile Marketing Digital LTDA. "Wowza's media server is also the best app for live transfer from IP cameras; other solutions offer this feature, but none provide such intuitive operation. As our application to visualize transit and our social community grows, we are confident in our ability to continuously deliver a stable, reliable and flexible solution to our growing user base."

New applications
The free app #trânsitoaovivo has become so popular that it currently attracts drivers and non-drivers alike. The camera views for the live visualization of 2 Mobile's traffic amount to an average of 300,000 per month, reaching 121,000 users. The interface is quickly becoming one of the most popular free apps in Brazil.

Due to the popularity of live traffic display cameras, 2 Mobile is studying the possibility of installing its app on elevator monitors to add traffic status updates to news and weather reports. Additionally, the application will soon transfer videos in real time on Facebook.

In addition, thanks to a successful advertising strategy and numerous user requests, #trânsitoaovivo will increase the number of camera installations in Brasilia and expand to other cities in the rest of the country, hopefully in time for the 2014 World Cup, and for the 2016 Rio de Janeiro Olympic Games. The service's new features could include a random camera feature that captures panoramas of the various traffic cameras at 5-second intervals, with an option for users to take snapshots from their mobile devices.

With the support of the Woza media server, 2 Mobile was able to implement a specific market opportunity, overcoming the barriers involved in a fragmented mobile market and an unstable internet infrastructure. In addition, it was able to implement its solution quickly and without significant investment, allowing the company the flexibility needed to respond to the ever-changing demands of its user base.

No thoughts on “Streaming for traffic monitoring”