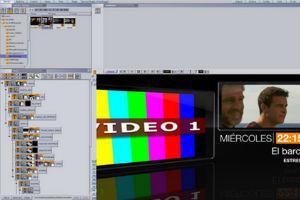 The Spanish chain has automated all the graphic processes within its Continuity and Promotions areas with the vizrt company system.


Antena 3 is a leading Spanish communication group in the audiovisual business that has eight television channels of national coverage that control more than 42% of the advertising market. Recently, the company has redesigned its corporate image with a new Vizrt channel branding system that has revolutionized the way of doing promotions and graphics in Spain.

It all started when the network proposed to release a new image that included the redesign of all the promotional visual elements that appear during the television broadcast. "We had to launch a very innovative corporate creativity in broadcast for which we needed to solve some technical limitations by the hand of a new channel branding system that in addition to offering us an improvement in creativity would also allow us an improvement in workflows," recalls José María Casaos, technical director of Antena 3.

The fundamental requirements of Antena 3 were to have a system that integrated perfectly with its Harris ADC-100 automation tool and that had a centralized common repository that allowed sharing and managing the graphics from the different departments of the chain.

The installation has been carried out in the record time of two months by the Spanish office of Vizrt, the broadcast and multimedia engineering company Unitecnic and the Department of Engineering and Systems of Antena 3.

After the recent merger between Antena 3 and La Sexta, Vizrt's channel branding system has also been fully integrated into the four channels of La Sexta (laSexta, Xplora, laSexta3 and laSexta HD) that have transferred their continuities to the Antena 3 broadcast center in Madrid.

Marketing-controlled 'channel branding'
One of the main innovations of the system is that it allows complete control of the channel branding solution by the marketing department. "The interesting thing in Antena 3 is that, with this system, all the control and all the generation of the content is marketing, and only later it goes to master control," says Pablo Herrero, regional director of Vizrt for Spain, France and Portugal. "That is to say that we are not talking about a simple solution that generates signs on the screen, but it is a tool that allows the marketing area to communicate with the audience and decide when, where and how promotions and graphics are inserted," he adds.

José María Casaos reinforces this concept: "Now, the departments of marketing, promotions, corporate image and even commercial or multimedia can guide with total simplicity and from their own jobs thousands of promotions, graphics and creativity, which was impossible to do before, which has opened a new world of possibilities for promotion and creativity".

In that sense, the integration of the Vizrt programming plug-in in the traffic department of the chain plays a fundamental role, and has been one of the great novelties of the system. "When the stairs are being created in the traffic department, you can view in real time the contents that are going to be broadcast through the plug-in," explains David Vivas, technical director of Unitecnic in Madrid.

Another of the strengths of the system is the centralized repository Viz Graphic Hub that allows the graphic content of all channels to be in a common place and can be managed and controlled from the different areas of the group. "It's a content management system created specifically for graphics that gives you the ability to see all the graphics you have in your system and automate the processes of issuing and debugging those graphics," says David Vivas.

José María Casaos recalls that in the past each of the group's chains had its own graphics repository, which required more staff to load the different graphics, while slowing down the workflow. "Now, all the chains pull the same synchronized common repository of graphic content, so that the different areas involved, such as design, marketing or broadcast, can work with the graphics from their own workstations without having to move to continuity. This allows a very important saving of resources and a notable improvement in the efficiency of the processes", says the technical director of Antena 3.

Integration with continuity
The integration of Viz Multichannel with chain automation is another key element of Vizrt's solution. The system allows a parallel ladder of graphic events that runs in sync to the Harris emission ladder, thus automating the entire process of inserting logos and graphics. This exchange of playlists between automation and the graphics system means that any change in the emission ladder also means a change in the graphic layer.

"The integration of Viz Multichannel with Harris makes it a practically automatic system from creation to broadcast, allowing us to have much higher control over the entire graphic layer of the broadcast and offering us the possibility of performing actions that were unthinkable before, such as changing in real time a graphic image in all the chains with a single click", says René Abril, project engineer at Unitecnic.

David Vivas also highlights that the entire system runs on standard IT platforms: "It is a very open platform without proprietary hardware that serves the end user, which is one of the great differences that Vizrt marks with respect to other manufacturers".

The truth is that the entire Vizrt system has allowed Antena 3 to significantly increase the creativity of the branding of the house. "The creative capabilities of Vizrt's tools have made us the most innovative Spanish chain from the graphic point of view, always complying with the regulation and at the same time changing the face of the graphic image of our channels," says José María Casaos.

In fact, with Antena 3's new channel branding solution, the number of graphics insertions has grown from 15 to more than 200 per day in each channel, with the same team of content editors and graphic designers as in the previous system.

Engineering, development and innovation
The technical director of Antena 3 also highlights the engineering and systems work that the whole project has demanded: "Throughout the installation process there has been a very innovative development and integration work in the continuity that has also meant an innovation in Vizrt's own solutions, and here the Department of Engineering and Systems of Antena 3 has had a lot to do with it, I3 Television and Unitecnic".

In that sense, David Vivas points out that "many specific requirements of Antena 3 have been implemented in the system to cover the needs of the chain, which has meant that it was a project of a very high demand both at a technical level and at the start-up level".

No thoughts on “Antena 3 automates your graphics”