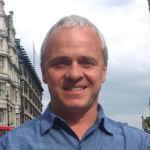 30 years of experience in the industry, from various facets, have made Alessio Gronchi an outstanding professional with extensive knowledge about the moment that television lives in Latin America. Share with us some of your experiences.


Having experience in front of the cameras as a presenter, behind them in the areas of creativity, production and engineering, and now as a supplier of equipment and systems, is an experience that few people, like Alessio Gronchi, can count on.

Although Italian by birth, our Professional of the Month invited for this edition is a worthy representative of the television of Panama, a country to which he arrived at the age of 14 in the company of his family and where he would soon end up linking himself to the media and then dedicating himself only to this exciting industry.

He commented that the link to the media occurred at the age of 16, when he began working as a cabin operator at the radio station "Stereorey" and a year later as an announcer in "Radio Diez", both in Panama City.

"I entered the world of television in December 1983 as the host of a weekly music video program on TVN, Channel 2. In this channel I also held several technical positions, going from cameraman, editor, until I became head of production and programming in 1989, "he said.

This graduate in Social Communication at the Santa María La Antigua University of Panama, took advantage of the experience acquired and in 1989, together with two friends of the university, he founded the company DataServe S.A., which in its beginnings was dedicated to computer programming and soon became a distributor and representative of hardware and software solutions for the television market.

What he sees coming
30 years dedicated to television in its different facets are meritorious for Alessio Gronchi to speak with authority about the moment that the industry is experiencing, of which he assures that it is living the greatest period of changes in its history.

He highlighted the proletarianization of technology as the most important evolution that the television industry has had in the years it has been linked to it. He argued that 25 years ago having a video production company was a million-dollar investment business. But today new technologies have allowed the massification of the technological resource, allowing many people to enter the business who would not have had access to it just two decades ago.

On what is coming, Alessio Gronchi added that every day more and more radio and television frequencies and transmitters will no longer be important and the investment will be concentrated in various wireless data platforms that allow to bring an important bandwidth to the user regardless of where he is, so that he can have access to audiovisual content and with an assured quality of service.

"In our country and in the rest of Latin America, the market has been growing steadily in recent years despite the political challenges faced by some large countries in the region. This has been motivated by different adoptions that the industry has had to go through, such as the digitization of plants, high definition and now the digital transmission of video and audio signals, among others."


The challenges of everyday life
The daily working day of our Professional of the Month begins at 8:30 am and ends before the night arrives, as it is clear that your personal activities also require time. In addition, having a set schedule is allowed by DataServe's administrative structure, which is decentralized, and thus spends most of its time staying in touch with customers.

There are several challenges that Alessio Gronchi pointed out for a manager of a company linked to the television industry. The first is to stay in tune with the way customers are evolving and where their business is going, "to align our resources and knowledge towards obtaining tools that facilitate this transition and enable the new businesses that arise every day as a result of the paradigm shift that the industry is experiencing."

The second challenge is to obtain, train and retain talent for a performance with excellence, since the high demand for qualified personnel and the low local availability of human resources forces them to maintain a competitive salary level in order to retain what they consider their greatest asset, their collaborators.

The third challenge is to enhance the brand and value its own content, because, he said, the times of retransmitting a product packaged by large producers will end, since each producer will find a way to reach their audience directly in most cases.

"The key to subsistence for television channels will be the unique possibility they have to locate their contents or, in other cases, universalize them so that they are exportable outside the borders of the country in which they operate. That is why we see the growing investment of all players in the empowerment of their brands and the elevation in quality of their own content," he added.

Family and solidarity
Alessio Gronchi was born in Pontedera, a tuscan village in Italy. And despite having left there many years ago, he does not forget his homeland, as he commented that it is one of his favorite places to rest and relax, enjoying the simple landscapes and the Tuscan countryside.

"My favorite hobbies have to do with outdoor activities, particularly beaches; I regularly exercise running and practicing crossfit. I travel as many times as I can because in today's competitive world it is essential to give yourself spaces of relaxation that are never complete if you do not leave your city or your country."

Solidarity is also part of his life. He has been a member of the Rotary Club Of Panama Northeast for 10 years and currently serves as President of the Club until June. There are several activities that they carry out from there, some shared with their family, made up of their wife and two daughters, Isabella and Monica, 20 and 18 years old respectively.

"The works of help to the most needy that I undertake as part of this civic club and that include, among others, pure water projects for needy communities, medical and dental tours, logistical support in case of natural disasters, help me to stay in touch with reality and not forget the importance of sharing and giving back to the less fortunate part of what I have been able to reap through my professional ventures ".

Apart from staying informed about situations affecting the industry, he is also interested in other topics, such as politics and economics. "Although it is not in my plans to carry out activities in these fields, I read many works that deal with these topics."

And although there are many anecdotes in his working life, such as when several times during his career he said that he knew perfectly well how to solve the client's problem without having the remotest idea of how to do it, the ones he particularly treasures are from his personal life.

No thoughts on “Experience behind and in front of the cameras”