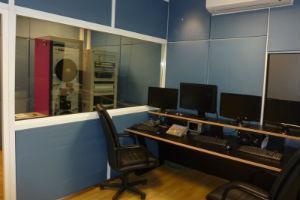 Recognizing the value of recovering the images of the past in the digital age of television, Argentina's Canal 7 implemented a work system that restores and adapts old videos to preserve and transmit them in today's realities.


Transferring archived material can be a lengthy and potentially expensive process. So when software designers from Buenos Aires-based XV-Tech offered Argentina's TV provider, TV Pública Canal 7, an efficient and cost-effective solution, the station soon jumped at the chance. This solution is based on the use of Blackmagic Design hardware products and SQUID LoopRecorders software.

"We were the first TV station established in Argentina, we have been in operation since 1951, providing material focused on educational, informative, public health and entertainment programming. After broadcasting for more than 60 years we have accumulated an extensive library of programming. This is of great importance to us, especially the historical content of journalism, films and documentaries dating from the mid-twentieth century," explains Maximiliano Tocco, Digital Content Manager for Channel 7.

Tocco's specific area of work includes the digital preservation of audiovisual material and the design and development of tapeless workflows in broadcast environments. Therefore it is well trained to evaluate the effectiveness of a system for archiving content.

Channel 7, which operates seven studios from its headquarters in Buenos Aires, distributes its programming through analog and digital terrestrial signals, via satellite and cable. He also broadcasts on the internet and has his own YouTube channel.

"We are already broadcasting much of our material in high definition HD. So the material we are transferring from cinema film has to be suitable for HD streaming, and the content for the YouTube channel must also be in this format."

Ariel Mindiuk, president of XV-Tech continues the story. "In fact, the product package we presented offered TV Pública two solutions; both included our Squid LoopRecorders, with Blackmagic Design products, for procurement processes. In addition to transferring the file to a video format, it also provides the means to digitize some of its signals on the air, so that it can be cataloged and encoded for its own YouTube channel."

This includes SDI, HDMI 3D frame packaging and analog component, plus analog audio and AES/EBU. This makes it easy to capture and play from almost all video and audio equipment. It alternates between standard definition SD and high definition HD, and incorporates an SDI of 3 Gb / second, RGB in formats 4: 2: 2 and 4: 4: 4, 12 native bit and frame rate up to 1080p60. Other aspects include upstream or downstream cross-conversion, and an internal mask generator, or keyer, for SD/HD.

Once the material has been captured, the Squid MediaStorage + Archiving software is used to adjust and catalog the files, allowing each clip to be saved with an appropriate title and a recognizable description of its contents.
Workbenches are then used with Blackmagic Design DeckLink Studio and Squid MediaManager Pro modules are used to search and examine the files needed for future use.

"The entire installation process was achieved quickly. The implementation of the Blackmagic Design and Squid elements only required four or five days. The installed system allows Public TV to generate open-ended tapes for linear offline or LTO," says Mindiuk.


The integration of Blackmagic's DeckLink line to the different modules, produces the interface required for the input and output of analog and digital audio and video, with SD and HD type signals.

"Our relationship with Blackmagic Design began immediately after installing DeckLink's solutions. We use Blackmagic hardware to develop our own solutions. In effect, it has opened a new door for us, because it also functions as an image buffer. Now we can mix MB2, SD, HD, IMX, VCPro and other formats in a single timeline," says Mindiuk.

For this Public TV solution, Squid's integration with Blackmagic Design provides, at a reasonable cost, high-quality connectivity between sources and SDI to HD scanning systems.

Working for the Internet
The other project for Public TV, whose combination of Blackmagic Design and Squid established an effective solution, relates to the station's YouTube channel. The Argentine Public TV channel on Youtube is one of the most important on-demand television portals in Latin America and its mission is to provide deferred content from the air to both resident and non-resident citizens in Argentina.

"We captured the original material from the transmitter and sent it to their YouTube channel. This solution generates a good workflow during the acquisition of material, and also catalogs and codes it to add it to its own Channel on the Internet, "says Mindiuk.

When you are considering the workflow for a specific project, the customer's technical needs must first be assessed, and each Squid module is integrated into Blackmagic hardware in a special way for each purpose.

"LoopRecorder and AsRun systems, equipped with Decklink Studio hardware, are used in most of the processes related to the digitization of signals that Public TV uses for its content on YouTube," says Mindiuk. SQUID's AsRun includes a server that continuously records up to two signals in WMV format. The selected segments can be exported to WMV, DV25 or MPEG2 IBP, for use outside the system.

Blackmagic's DeckLink Studio 2 is an SD/HD video card with SDI, HDMI and analog connections that enable unobstructed movement between SD and HD workflows. It includes its own hardware for downconversion and inputs and outputs for four analog audio channels, and for two AES/EBU digital audio channels.

In addition, it includes a sample rate converter in the AES/EBU input that allows you to connect all types of audio equipment with synchronized or unsynchronized sources. DeckLink Studio also has 8 channels of hosted SDI audio, perfect for Public TV editing rooms that work with Media Composer 6 and NewsCutter.

Mindiuk emphasizes that since these two projects were completed using Blackmagic Design and Squid solutions, no disruption to the workflow has occurred.

The President of XV-Tech concludes that "one of the main characteristics of Squid solutions is to generate new workflows. We are not just an acquisition or transmission system. We are a set of tools that offers a solution from start to finish. Together, Squid and Blackmagic Design, as technology partners, have the ability to provide a technology solution at a very high level."

No thoughts on “Capture the past with modern magic”