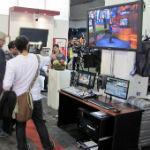 Colombia. Five prominent members of the television industry from four Latin American countries are part of the Advisory Committee of TecnoTelevisión 2013, a group that will be in charge of helping to structure the Academic Program of the sixth version of the Congress.


From Chile is Luis Silva, technology manager of Chilevisión, who has 30 years of experience in the industry in which he began as an electronic engineering student at the Pontificia Universidad Católica de Valparaíso, on the channel of that university, UCV Television.

We also have the experience of Cayetano Grossi, technical head of Channel 7 in Argentina, who has a family relationship with the television industry that has allowed him to learn about the details behind the cameras since he was a child, at which time he aroused his interest in this industry.

On the other hand, from Venezuela we have the support of Eduardo Caballero, President of Mediax professor of the chair "Media Management" at the Monteávila University and member of the Boards of Directors of the newspaper El Nacional and Lead Media C.A.

This group is joined by two Colombians. Luis Feranando Gutiérrez, University professor and Director of university TV programs. He is a specialist in television from the Javeriana University and is currently pursuing a master's degree in education with the Tecnológico de Monterrey.

In addition, there is Carlos Iván Fernández, manager of Seel, who has extensive experience in different production houses, both in Colombia and in the United States. Among them are ABC News where he served as Post-Production Coordinator; at Teleset he was Director of Post-Production; in RTI as Director of Technical Resources; in Caracol he was Executive Producer.

TecnoTelevisión 2013 will be held at the Corferias Convention Center in Bogotá, Colombia, on July 31 and August 1st. If you have any topic suggestions that you would like to see or propose a conference please write to the email rsanta@tecnotelevision.com

No thoughts on “Advisory Committee works at TecnoTelevisión 2013”