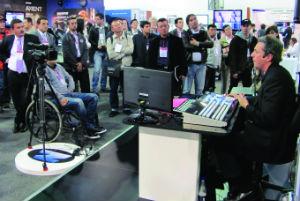 The latest version of TecnoTelevisión demonstrated that this Congress and Commercial Exhibition has grown and matured, supporting the needs of an industry that confirms its importance for the region.


A broad overview of what is coming in the coming years for the television industry in terms of technology, trends and regulation, was what the attendees of the Academic Programming and the Commercial Exhibition of TecnoTelevisión 2012 could know.

This year, 1,219 people passed through the stands of the 26 companies, including manufacturers and distributors, which exhibited in 1,200 square meters that the Commercial Exhibition had arranged, a figure that represented a growth of 20% compared to the 2011 version.

In these five years, TecnoTelevisión has become a must-see reference for all television actors in the Andean Region who want to be updated with what is happening in this industry. This is recognized by those who participated in the Commercial Exhibition.

Among them Daniel Amaya, who with a group of partners formed the company ATG six months ago and chose this Expo to make its official presentation to the market. He assured that "those of us who make up the company have a lot of experience and knowledge of the industry and we were clear that this was the scenario to launch ATG".

A similar case is that of Pierre Betancur, who with his company ICL participated for the first time in the Expo, after having met her last year when he attended as a student. "The experience was very enriching because a lot of specialized people came and we realized how the industry is advancing in the region."

The constant developments of technology is also one of the factors that most take into account the exhibitors, such as Joaquín Varela, from Instelc, who said they have to be opportunities to strengthen the business, "for a company to survive it has to go to the future, it has to be constantly updated".

Looking for new niches
Although the raison d'être of the distributors of the broadcast industry are television channels, there are other niches in which they have great market possibilities. Among them are universities and some large companies that for their internal communication are producing video with professional teams.

Distributors such as the company La Curaçao have been taking advantage of this situation. According to Carlos Yhama, in recent years universities that have communications faculties or careers related to television, have been worrying about their students leaving better prepared every day, and in that sense they need to have the latest technology, as long as the economic factor allows them.

This situation, he added, has allowed the quality of audiovisual production in the country to be increasingly high and that students now not only seek to be employees, they also want to set up their own audiovisual content companies taking advantage of new distribution channels such as the internet.

The other niche is the internal television channels of large companies with broadcasting in closed systems, through which they cover events, do training and recreation activities. For this they require professional production centers, which although they do not compare with the large technologies used by television channels, if they use medium-level equipment.

Although these two segments are slow markets, they provide business opportunities that should not be wasted.


With a technical approach
The participation of the commissioner of the National Television Authority, Alfredo Sabbagh in the inaugural panel of TecnoTelevisión, as well as his presence and that of Alexandra Falla, also commissioned, in the Commercial Exhibition during the two days of the Expo, allowed attendees to know in depth what the new entity has been working on.

One of the main points that Alfredo Sabbagh wanted to highlight about the first months of management of the ANTV, is that technical nature of the board, because now they are not in charge of administrative functions, which spent part of the time of the defunct National Television Commission.

Directly with the management of the entity, he pointed out the program through which they want to bring the television service to the 8% of the Colombian population that still does not receive it. With DTH Social they seek to provide satellite television service, which would have a maximum of 16 channels, all public and private open signal in Colombia.

To receive this service, the beneficiaries will require a set-top box, which the ANTV expects to be very low cost or even subsidized for low-income sectors.

On the process of awarding one or more television channels for the country, Alfredo Sabbagh indicated that they are waiting for the results of a study of investment banking that allows them to establish how many more channels are able to receive the Colombian market.

According to the entity's schedule, in 14 months at the latest the new channel must be awarded. And in the event that the study indicates that there may be two new channels, it will be the ANTV board that defines the calendar to award a fourth channel.

One of the speakers who accompanied the delegation from Brazil was Ulises Barreto, who said that they are part of a group of companies that manufacture technology for broadcasting that is taking advantage of the moment offering products focused on the adoption of digital television.

Amauri Fernández was another of the Brazilian exhibitors who was present in Bogotá. He said that one of the interests of Brazilian technology companies to expand their market to countries like Colombia has to do with the development and growth of their economies, in addition to wanting to take advantage of the trade agreements that his country has signed with others in the region.

Ulises Barreto highlighted the positioning of TecnoTelevisión as one of the main scenarios to open the market in the region. "We are participating in the most important fairs in Latin America and from now on TecnoTelevisión is on the agenda of the unmissable fairs."

We are already working so that the 2013 version of TecnoTelevisión, which will be held on July 31 and the first of August in Corferias, continues to be a benchmark for the television industry of the Andean Region and accompanies the transition process that we are currently experiencing.

No thoughts on “Technology and trends in TecnoTelevisión”