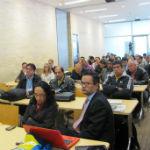 Colombia. That 85.71% of those attending the Academic Program of TecnoTelevisión 2012 have answered affirmatively to the question Would you recommend the congress to your colleagues?, made in the final survey, shows us the high degree of satisfaction with the Congress and puts us a greater challenge for next year.


From now on we began to work so that the 2013 version of TecnoTelevisión meets the expectations of the industry, that is why we are forming an interdisciplinary Academic Committee that allows us to have different visions about what is happening in the industry and thus structure a useful conference program for everyone.

But in this process we also want to have the opinion of you, our readers. We invite you to write to the email rsanta@tecnotelevision.com with suggestions on topics that you would like to see included in the Academic Program of the Congress next year or if you have any technical or academic conference that you would like to put into consideration of the Committee.

TecnoTelevisión 2013 will be held again at the Corferias Convention Center, in Bogotá, Colombia, on July 31 and the first of August.

No thoughts on “TecnoTelevisión 2013 opens calls”