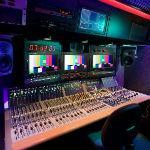 Through his company, Jorge Delgado has managed to position himself in the television industry in Brazil taking advantage of the opportunities offered by the market, both as a producer and in the rental of equipment for production.


There is nothing better to acquire extensive knowledge about how a company works than to go through the largest number of positions in different areas. And this experience becomes more relevant if you talk about a company in the television industry.

This is the case of the Brazilian Jorge Delgado, our Professional of the month invited for this edition, who has about 27 years dedicated to this industry. Today he has become a benchmark for the industry of his country through his own company, Camera2.

Jorge says his first job in the television industry was at the defunct Brazilian network TV Manchete, which existed for 16 years between 1983 and 1999.

"I started working in television in 1985 at TV Manchete, a network in which I worked as an A.D.O. operator, which was an Ampex effects machine, as well as editor, TV director and call department, among many other functions carried out informally. In this network I went through almost all the areas of operations of a television station."

Leveraging experience
The experience acquired in the TV Manchete network and knowing all the steps of television production, was taken advantage of by our Professional of the month to create his own company with two more colleagues of the chain.

"When TV Manchete closed, I stayed in the market as a video producer along with two other people who also worked in the production. Over time, as my two colleagues continued to be more related to the production areas, I became more interested in the technical area," he said.

Over the years, Jorge Delgado has been specializing more and more every day to support his clients in the areas of editing, finishing and very focused on the technology part.

"The search for technical information that would allow us to always be up to date, aroused my interest in the new trends in the technological area and, by destination and by the needs of the market, we have just begun to invest in equipment leasing," he said.

He says that his company, both for the production of video and for the equipment rental service, was designed with services and attention different from those of the market. To achieve this, a series of questions were asked:

What would be the best accessories? Why not arrive with the equipment directly to the recording set? Why not know what kind of recording would occur to suggest technological solutions that suit the needs of customers? Why not accompany the editing and completion for further self-criticism and new suggestions for further recordings?

Future plans
The questions raised above are valid and make Camera2 have other possibilities for growth in the coming years. In this regard, he said that "all these issues are being put into practice and therefore the number of customers day by day is greater. In the future, the company could absorb new responsibilities such as training and operational technical equipment in conjunction with the requested equipment."

Growth has also led to them venturing into new services. They are now in the area of transmitting and receiving events through integrated UpLink mobile units. With these they continue with the differentiated service they seek to offer, because there are very few companies in Brazil with hybrid cars, that is, with production and transmission simultaneously.

Our Professional of the Month concludes that "this is the area in which we have concentrated our efforts, but without neglecting what led us to be one of the largest companies in the Broadcasting industry in Brazil. I say this because we are not the largest light rental, but we have a lot of light materials; we are not the biggest in the transmission, but we already have two transmission cars and two more production cars. In the case of ENG cameras, you can no longer say we're not the biggest, because maybe we are."

No thoughts on “Passionate about TV technology”