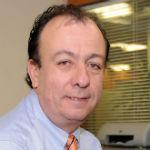 Understanding the changes and challenges facing the television industry with technological developments and applying them to reach more viewers, especially young people, is the challenge of our Professional of the Month.


One of the characteristics of Fernando Campos during his professional life is the taste for taking projects from scratch and taking them through his entire process of launch, growth and consolidation. This is precisely why he came to work in the television industry.

After graduating with a degree in Communication from the Universidad Iberoamericana and pursuing an MBA at Ipade, he dedicated himself to working in marketing from advertising agencies and customer service. This was the case until six years ago, when he was called by Azteca to lead one of his most important projects.

Under this vision, he understood that  television is a production house with the responsibility of producing the contents of the best possible quality so that they are relevant to the audience and to be able to deliver them through the different platforms that are available today, especially among the youngest segments of the population.

After assuming the direction of new media, one of the challenges for Fernando Campos is to stay updated with all the technological advances, at least to be aware of where the industry is headed.

"Fortunately in my work team I have some collaborators who dedicate professional time and often personal time to be researching, browsing, discovering new things, new tools, new functionalities, new ways of presenting the contents," he said.

That is why he holds a meeting a day with his work team, in which they socialize what they have been discovering in the network and the things that can have an added value for the activities they carry out daily and when it is convenient they acquire them to incorporate them as part of the infrastructure they have available.

"One of the things that my team says always characterizes me is the use of phrases to illustrate some of the concepts I refer to and one of the ones I like the most, is the definition of 'stupidity' which is to repeat a hundred times the same action expecting a different result, "- " he said.

He adds that one of the guiding axes that he has tried to imbue his entire work team to think in a different way, to look for different options, not to try to change things if they continue to do the same.

Television, with a promising future

For our Guest Professional of the Month, new developments around televisions, such as those that allow internet connection and interaction with web applications, mean that they have ceased to be a dumb box and now the industry has a promising future.

"More and more we are seeing that people want to consume content when they want, how they want, with whomever they want, at the time they want and, in that sense, digital platforms take on important relevance because it is precisely the way in which there can be a personalized television and people can consume the content in the best way they see fit."

The change in television consumption habits, marked in part by penetration among people that in Mexico reaches 99% in the open signal and 35% in cable, is also a fundamental factor to see where the industry is headed.

"From the multiplicity of content offer that is available, not only in linear channels but also in consumption on demand, we have had an important change in the strategy for five years, simplifying the digital platforms that have come to generate very significant changes, I insist especially among young people that make us turn to see the relevance of digital platforms", Said.

For these digital platforms, Fernando Campos highlights that multiplatform content is required, with multi-presence in the sense that not only do those contents live more in the web portal of the television, but that they are present on Youtube and on the platforms of Microsoft, Apple, mobile phones with Android, with iOS.

According to Fernando Campos, from his experience during these years in television he has learned to understand that the fundamental thing to stay  alive in the industry: to understand what the user and the viewer are looking for and, therefore, what is the best way to give it to them.

This situation has generated, he explains, that attention is dispersed among several options, not only on television, but also entertainment between different devices and that is why it is important to understand how new viewers behave, what they like, how they like to consume it, how they like to share it, why television or products stop being consumed individually to be consumed again in a group.

"Television companies must understand that we have viewers who are 13, 14 or 15 years old and that we also continue to have viewers of 50, 60 or 70. So we have to make a television to some extent personalized. I feel  that this is the most important challenge that the television station has and all those people who work doing television."

In all the changes the television industry has experienced in recent years, which Fernando Campos highlights, includes the way in which the viewer is impacted to make the purchase decisions of the products, being word of mouth one of the most effective.

"The main concern of customers is how television can help generate that word of mouth, how it can give an endorsement  to that product, the endorsement of the product. We are very clear that people have the perception that if a product that is advertised on television is a good, solid product, but television alone can not close this circle and then you have to make use of the rest of the platforms to generate this recommendation scheme . "

Fernando Campos is proud to talk about his family, which he says is "a very good family". His home was formed 26 years ago when he married Cecilia, with whom he had three children, Sofi, Ana Cecilia and Fernando, who are now 24, 21 and 17 respectively.

On his tastes when he is out of the office, he indicated that he loves motorcycles: "I am a motorcyclist, I try to go out every Sunday to take a lap of 300 or 400 kilometers on the motorcycle. Also, I love photography and reading."

Since he began his work at Azteca Web he added one more to his hobbies, technology. "In Azteca I have also become now a bit 'techi' and a fan of technology, especially Mac thanks to my inventor friend Rodrigo Luna."

No thoughts on “"You have to think differently"”